Sail and Explore – magical adventures to the Azores

Our week on a boat – written by Alice, Sebastian and Eduard

My trip sponsored by the SJf Sonderpreis from the Gamil Stiftung started out a bit differently. At first, I was awarded a different prize for my work. But due to a technicality I was given the option to choose a different prize. As I always wanted to go on a sailing expedition, I decided to take the sail and explore expedition to the Azores. As it turned out this technicality led to one of the nicest vacations I have ever had and the decision to go to the Azore might have been one of the best decisions I made in my life. 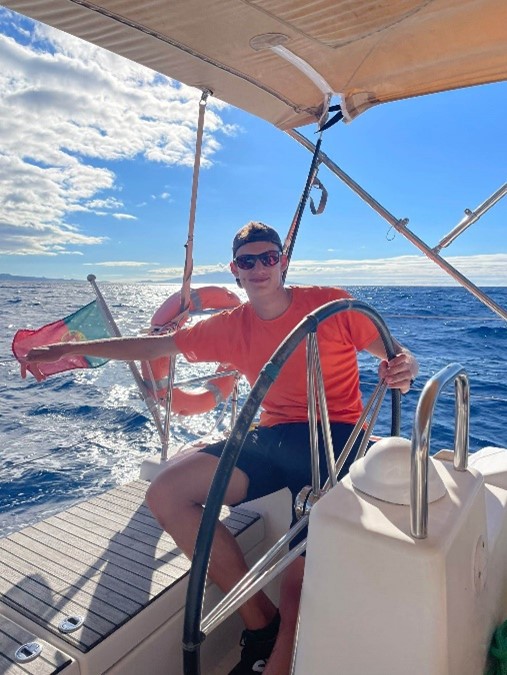 In preparation for the trip, I studied a bit about the islands, what weather I could expect and what animals I might potentially see. I was surprised however when the leader of the expedition said that we would probably see dolphins every day. After hearing that I could not wait to be on the boat.

The week on the sail and explore ship was just magical

It began with a short safety briefing by our skipper Adrian and a quick tutorial on how to use the troll which we would later take samples with by the expedition leader Roman. After this we sailed from island to island, starting on the island of Faial and ending on the island of Terceira. In between we took samples and to our surprise saw dolphins EVERY day swimming around our boat. We got to experience the raw beauty of the islands from the coast and at the same time learn about how microplastics effect the natural habitat around the Azores thanks to interesting lectures held by a scientist we had on board as well as from Roman. As I will start studying in this direction it was quite interesting to listen to the presentations. 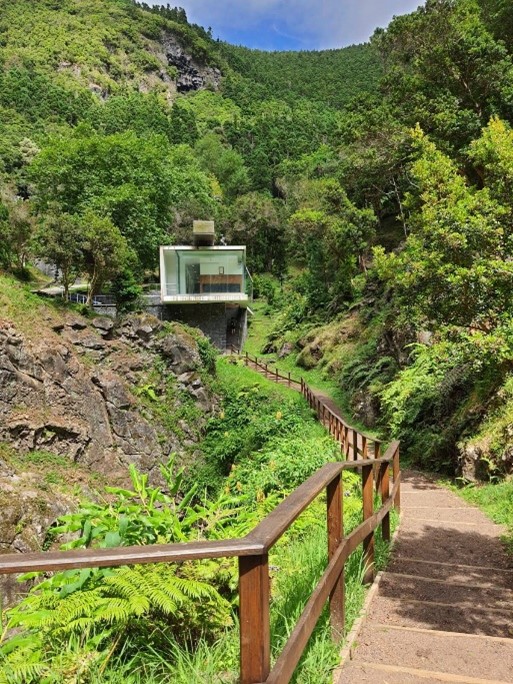 Fortunately, enough for me I was the only member of the crew (except for the skipper the lead scientist and the organization founder) who was not seasick. This however meant, that I had to do most of the heavy lifting around the boat for the first few days. This entailed putting the troll system into the water and then pulling it out again as well as taking samples from a depth of 25 meters with the niskin bottle, which was back breaking work.

To get a break from the ocean we even went on an excursion to a caldera on the island of Graciosa. Seeing the cave and the plant life on the island was remarkably interesting. This is why I can confidently say the experience was one of the coolest things I have done in my life, and I am extremely glad that I got to experience something this rare.

So, to anyone who might be reading this text. If you are thinking about visiting the island, visit them. The beauty of the wildlife, astonishing views, and genuinely nice people should be reason enough. I would again like to thank SJF and the Gamil Stiftung for giving me this opportunity.

I already got to go through for my Matura project. I already thought that this incredible experience was at its end when I got the news that I won this prize to go on a sailing expedition in the Azores to study microplastics. I was thrilled! Not only to get to go sailing in the middle of a wonderful archipelago, but also to discover a very important global issue. So,I started reading all about the topic to get acquainted to what laid ahead of me. 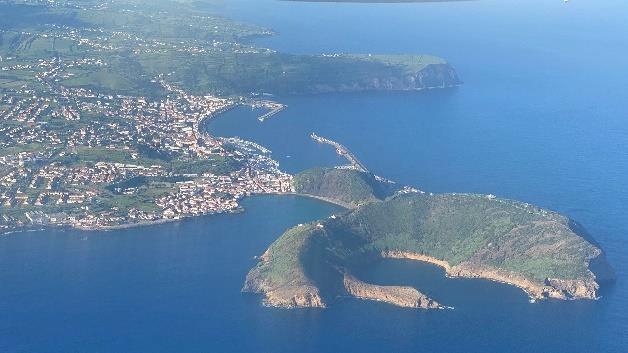 After having met the amazing crew, whom I had the pleasure of sharing the expedition with, I made myself comfortable in the boat, getting to know the different areas and safety instructions.The next day, it was go-time! Leaving the harbour and civilisation behind, we were in complete tranquillity, floating on the bluest blue I had ever seen, next to the jaw-dropping cliffs. But in fact, we weren’t alone at all. A group of dolphins came to the bow of our boat to ride the waves and play! It was at this moment we realised the true beauty of this place. 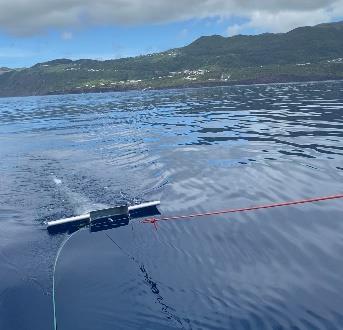 Microplastics in our oceans

Not losing the focus of the expedition, we started to collect the ocean microplastic samples. This was done using a so-called “Manta-trawl”, which has a netting of 300 microns to catch particles bigger than this cut-off, for surface ocean plastics, and another method for particles in depths of 5 and 25 meters. It was interesting to see the organisation of these experiments and the different control tests which were undertaken. Between the different samplings, we got different lectures about microplastics and the effects they can have. Additionally, we had a marine biologist on board who presented her master thesis about dolphins’ communication. Lastly, the other SJf prize winner and I presented our projects to the other participants.

To conclude, this was an absolutely incredible expedition! From the sheer beauty of the nature and the wildlife, all the way down to the unforgettable experience of living on a sailboat for a week conducting scientific experiments with a lovely group of people, this trip had it all! I am truly grateful that I got this award handed to me and got to experience this!

…that I would be in the Azores three years later thanks to winning a prize at the 56th national competition in Lugano, I probably wouldn’t have believed it. Everything took shape on 14 June 2022 when I was told that I could no longer take part in the European Young Scientists› Competition. Instead, I was offered a week-long expedition to the Azores on a boat to study the impact of microplastic on marine organisms. I don’t believe it but say yes without any hesitation! Let’s go! The journey can begin. 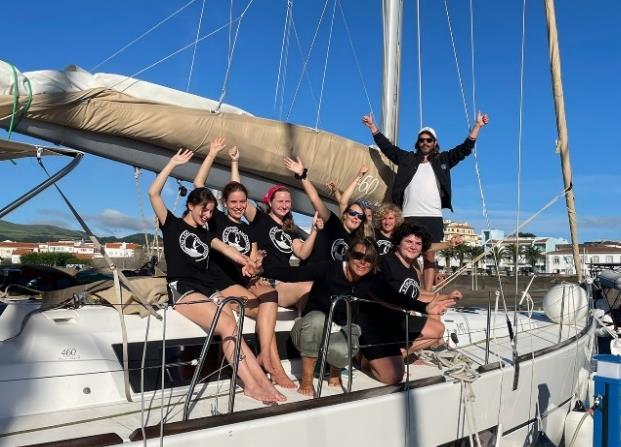 On August 26 2022 I fly to Terceira. Arriving at Angra do Heroismo, I realize how beautiful these volcanic islands are ; I had never seen anything so beautiful before. Those shades of green and blue are truly magnificent. The next day I go to the port of Praia di Vitoria where our boat is located and get to know the whole crew. I also discover our «moving house» as our skipper Adriana Kostiw likes to call it and settle in. After listening to the safety instructions, we are ready to leave. The expedition can begin.

At that moment I become aware of the number of species that can be hidden under the boat. Indeed, a few minutes after leaving the harbour we see 4 dolphins at the front of the boat. A biologist from the Azores who did her master’s thesis on communication between dolphins explains that they come to the front of the boat to surf the waves that it causes. It’s magical but it doesn’t stop there! Indeed, to make the most of the experience, we anchor on Ilhéus das Cabras to swim a little. Our biologist Clara warns us not to touch the Portuguese man – of – war, as they can cause serious burns. 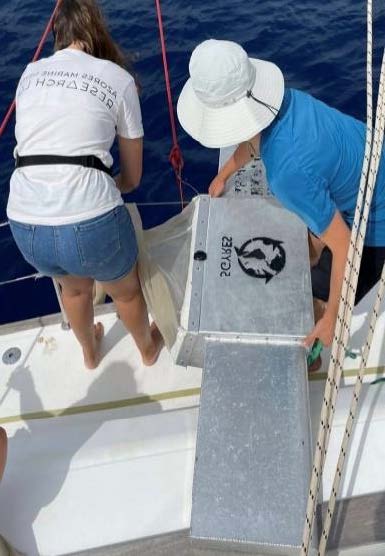 The days go by and so do the landscapes

Our days consist of a morning walk, swimming in natural pools and jumping off rocks, seeing dolphins and whales and collecting microplastics which will then be sent to a research institute for analysis. Indeed, although we have a lot of fun on the boat watching the dolphins and whales, we still have to collect samples. To do this, we can either put a giant colander called a Manta Trawl into the ocean or throw a bottle into the water at a depth of 5m and then 25m. Although we are ‹just› collecting these samples, Roman Lehner, the expedition leader, gives us plenty of explanations as to how this data will be used in the future. It is very interesting and rewarding.

The last few days have been the craziest

Indeed, now we all get along really well and the atmosphere is very pleasant. Moreover, now that Adriana has gained confidence in us, we can set sail and navigate without her help, or almost ;) I had never sailed before, so Luana, one of the girls on the crew, and Adriana explained it to me. The boat pitches a bit when I’m at the helm but I understand quickly. It’s much more complicated than I thought. So I’m really impressed with our skipper who manages to get us through this ocean without any difficulties. Sailing requires constant attention. 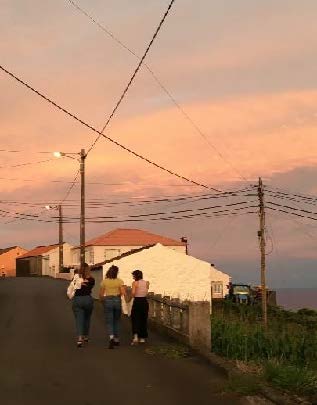 We end this wonderful stay in a restaurant with the Azores research team that Sail&Explore works with. It’s great and we can all say goodbye with a twinge of sadness. Indeed, I don’t think I will have the opportunity to have other experiences like this in my life, so I thank all the people who made it possible. I am extremely grateful to you all !